At the time of this writing, the latest stable version of Octave is 5.1.0. Unfortunately the graphical interface of Octave 5.1.0 is buggy on macOS and tends to freeze randomly. If you are OK with using the CLI interface of Octave, you can use version 5.1.0. See the second part of this article for a quick how to install and setup.

Since most Octave users will prefer the GUI interface, I will first show you how to install Octave 4.4.1, which seems to be more stable than 5.1.0 on macOS when used in GUI mode.

I assume that you have the Command Line Tools installed on your machine. If this is not the case, write the next command in a Terminal and accept the defaults:

The article consists of three parts:

In this article I will show you how to batch convert a folder with images to a PDF file. This is a problem that I encountered recently when I had to process a bunch of scanned images and save the processed files as a single PDF.

While there are many libraries that could be used for the above, in this post I will consider only two libraries Pillow, formerly named PIL and img2pdf.

If you need to install the two libraries, you could use pip, e.g.:

C Programming - Reading and writing images with the stb_image libraries

In this article I will show you how to read and write images with the stb_image libraries. In order to exemplify the usage of the library I’ll demo how to convert an image to gray and how to apply a sepia filter to the image.

As a side note, the C code from this article is compatible with any modern C compilers like GCC, Clang and MSVC.

You can find the source files and image examples used here on the GitHub repo for this article.

The article consists of two parts:

Let’s start by getting the libraries from GitHub:

if you don’t have git installed on your computer you can use the Download ZIP option.

In this article, I will show you how to build the newly released Windows Terminal from Microsoft. At the time of this writing, you need to build the application yourself, but it is expected to be released in the Windows Store by the end of this year.

In order to be able to use the Windows Terminal application, you will need at least Windows 1903 which is going to be released this month, in a matter of days. If you are like me and can’t wait until the official release of 1903, you can install Windows Insiders edition which will let you build and use the new Terminal application today. If you already are on Windows 1903, or up, you are good to go.

C++17 STL Parallel Algorithms - with GCC 9.1 and Intel TBB on Linux and macOS

Thanks to Bartlomiej Filipek for the suggestion to try C++17 parallel algorithms with GCC 9 and Intel TBB on Linux.

GCC 9.1 has support for C++17 parallel algorithms by using the Intel TBB library. In this article, I will show you how to build Intel TBB from sources on your machine and how to sort a vector of random numbers in parallel using C++17 std::sort.

At the time of this writing, the latest stable version of Intel TBB is version 2019 Update 8. You can find the latest release of TBB on their GitHub repo. If a newer version was released, change the version number from the next instructions accordingly.

Using Clang as a cross compiler for Raspberry Pi

We’ll start by building Clang as a cross compiler on the host x86-64 system. This will let us use the latest stable version of Clang, which at the time of this writing is 9. You will also be able to run the binaries compiled with this Clang version on Raspberry Pi 2 and up. You can also use the same procedure if you plan to build the trunk version of Clang in order to test the latest additions to the compiler.

As a side note, you can install the official Clang binary directly on your Raspberry Pi, check this article if you don’t want to build from sources.

I recommend that you do the build in a Debian Buster virtual machine or a Docker container in order to not mess your system. If you decide to install Buster in a virtual machine, make sure to use the minimal netinst system. It is really important that you start with a bare bone system, because we need to install armhf executables and libraries. By using a minimal system we avoid potential conflicts with the native x86-64 versions. Also, Clang uses a lot of memory when built from sources, make sure you have at least 8GB of RAM on your system.

Since C11, the standard way to get a good time estimate is to use the timespec_get function, which returns the system clock time:

Where timspec will store the time split in seconds and nanoseconds.

In this article I will show you how to use ANSI escape codes to control the colors of your Terminal, write text at arbitrary positions, erase lines of text or portions of the terminal and move the cursor. The advantage of using ANSI escape codes is that, today, these are available on most operating systems, including Windows, and you don’t need to install third party libraries. These are well suited for simple command line applications. If you need to do complex text graphics check the ncurses library.

Let’s start with a simple C example that will print a green text message on your Terminal:

Reading a file line by line is a trivial problem in many programming languages, but not in C. The standard way of reading a line of text in C is to use the fgets function, which is fine if you know in advance how long a line of text could be.

You can find all the code examples and the input file at the GitHub repo for this article.

Let’s start with a simple example of using fgets to read chunks from a text file. :

C Programming - Passing a multi-dimensional array to a function

In this article I will show you how to pass a multi-dimensional array as a parameter to a function in C. For simplicity, we will present only the case of 2D arrays, but same considerations will apply to a general, multi-dimensional, array.

In this article I will show you how to install Docker on macOS. In order to exemplify the use of Docker, we’ll use a container to build and run a simple C or C++ application with GCC 8.

Start by downloading Docker Desktop for macOS. If you don’t have a Docker account, sign up for one it is free and it only takes a few minutes to create one. Once you are logged in, you should be able to get the Docker app for macOS. Open the dmg file and drag the installer to your Applications, you can safely accept all the default settings.

In this tutorial, I will show you how to implement a singly linked list data structure in C++17 with smart pointers. This is also useful as an exercise in learning about how you can use smart pointers instead of raw pointers to manage the memory of the list elements.

For the purpose of this article, we are going to implement a few of the linked list possible operations: insertion, deletion and traversal.

What could be more romantic than to generate a heart shape with C++17 on Valentine’s Day ? 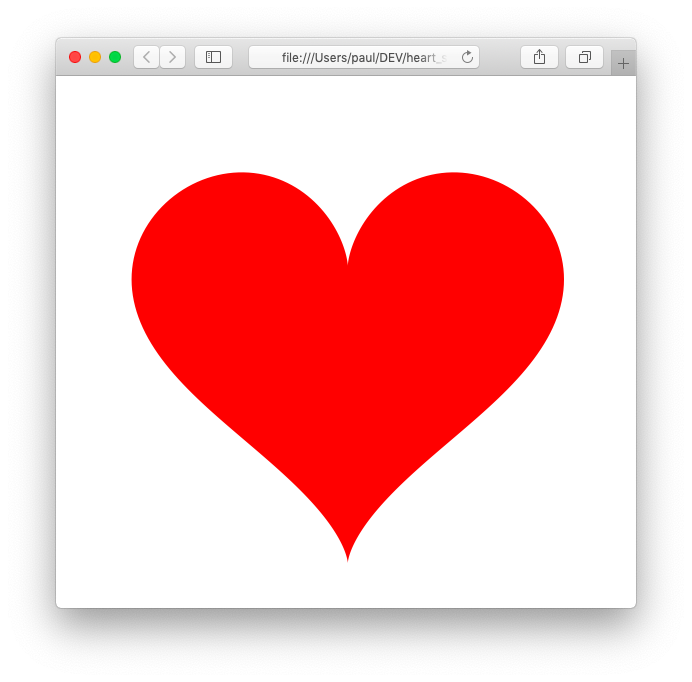 In order to generate the above shape we can use the parametric form of the outer curve:

We are going to implement a C++17 file watcher that will monitor a given folder for file changes. For our limited purposes, we’ll monitor only the creation, modification and deletion of all files from the watched directory. The base folder will be checked for changes at regular time intervals and, in case of changes, we’ll run a user defined function.

Raspberry Pi - Using C++ to control a group of LEDs

In this article, I will show you how to use C++ to control a group of LEDs connected to a Raspberry Pi. You can see the final results in this short video: