If you want to cross compile OpenCV for Raspberry Pi Zero please check this article.

I recommend that you do the build in a Debian Buster virtual machine or a Docker container in order to not mess your system. If you decide to install Buster in a virtual machine, make sure to use the minimal netinst system. It is really important that you start with a bare bone system, because we need to install armhf executables and libraries. By using a minimal system we avoid potential conflicts with the native x86-64 versions.

For the remaining of this article, I will mention only Raspbian and Raspberry Pi, if you are using a BeagleBone Black everything should work the same.

I’ll assume that you have a clean Raspbian install. I’ve used the latest available desktop image. In principle you should be able to follow the article using Raspbian Lite, but I did all my tests using the full desktop version of Rasbian.

First, make sure your x86-64 Debian Stretch virtual machine or container is updated:

Next, let’s enable the armhf architecture on the x86-64 machine:

At this point, you should be able to install armhf libraries and applications on your system and run them.

We are going to build OpenCV with support for Python and C++. Let’s install NumPy and Python 2, 3 for the host system:

Next, we are going to install libgtk-3 in order to be able to write simple GUI programs. If you plan to use OpenCV exclusively on a headless system you can safely ignore the next two libraries:

We also need to install a bunch of other libraries required by OpenCV (various image and video formats support):

Next, we are going to install the default cross compilers from Debian which can be used to create armhf binaries for Raspberry Pi:

At the time of this writing, the above toolchain is based on GCC 8.3, which is the same version of GCC available on Raspbian.

Next, we can download the current release of OpenCV. I will show you how to install the full OpenCV (default and contrib libraries):

At this point, we can use Cmake to generate the OpenCV build scripts:

Assuming that you had no errors, you should have a Makefile in the build folder. We can start the actual build:

Once the build phase is done, we can install the library:

Next, we need to change the name of a library that the installer mistakenly labeled as a x86_64 library when in fact it is an armhf one:

Let’s compress the installation folder and save the archive to the home folder:

To make our life easier, I’ve also prepared a simple pkg-config settings file, named opencv.pc. Get it with:

Copy opencv-4.1.0-armhf.tar.bz2 and opencv.pc from your home folder to your Raspberry Pi.

For the next part of the article, I’ll assume that you are on a RPi.

Make sure your RPi has all the development libraries we’ve used. Like before, if you don’t plan to use GTK+, ignore the first line from the next commands. Most of these libraries should be already installed if you are using the full version of Raspbian:

Uncompress and move the library to the /opt folder of your RPi:

Optionally, you can erase the archive:

Next, let’s also move opencv.pc where pkg-config can find it:

In order for the OS to find the OpenCV libraries we need to add them to the library path: 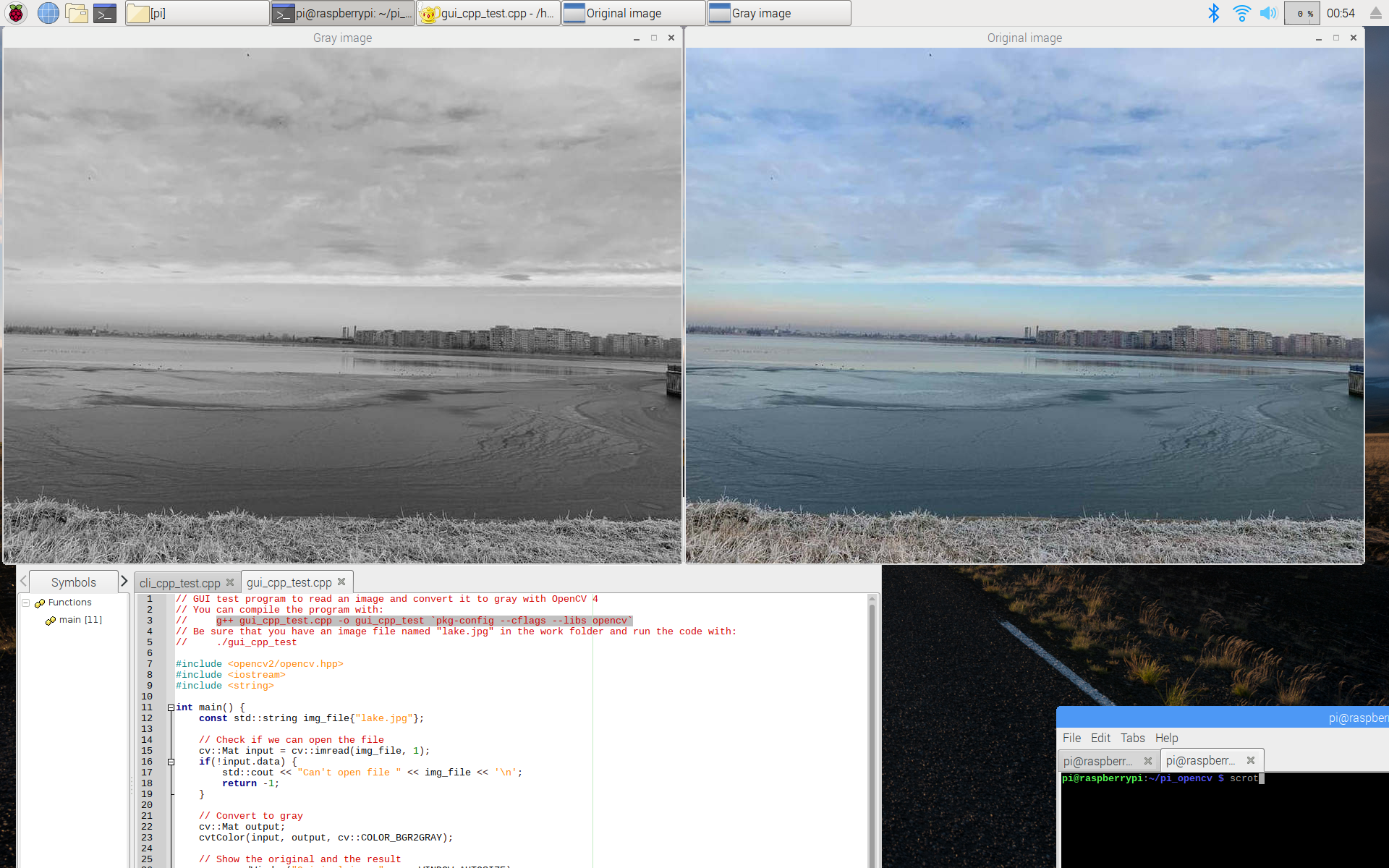 As a side note, it is also possible to cross compile C++ programs that use OpenCV on your x86-64 Debian Stretch system and run the binary on your RPi.